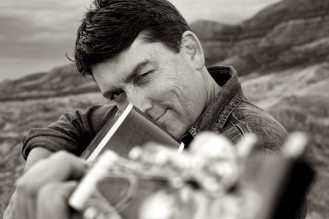 No other art form puts more stock in authenticity than country music, and there’s never been any question about that with Blake Reid. Just get the native of Cremona, Alberta talking about his upbringing and you’ll hear more than enough proof. In fact, there’s a story that in many ways best sums up Reid’s upcoming album, Rust. It goes something like this: One of his most cherished possessions is his grandfather’s ’72 Chevy pickup, which he’s managed to keep running like a top. One day, Reid’s young son asked why he’s never repainted the worn-down spot on the window edge of the driver’s side door. Reid’s response? That’s the place where his grandfather’s elbow always rested and covering it up would erase part of his story.
Rust is brimming with similar tales, showcasing Reid’s status as a true workingman’s poet, following in the footsteps of Merle Haggard and Tom T. Hall. At the same time, Reid is no traditionalist. The album’s first single, “Sounds Like A Song,” is the kind of hard-edged, instantly memorable track perfectly suited for a Saturday night play list, or as something to sing along with to make that long drive go a little bit faster. And as a testament to the power of songcraft, it’s also a reflection of the only real musical education Reid ever had, listening to AM radios installed in the trucks, tractors and combines he commandeered throughout his youth.
All of those elements add up to the vision Reid had for Rust from the beginning, celebrating the future while honouring the past. It was a concept that Reid’s producer Phil O’Donnell—one of Nashville’s many transplanted Canadians, whose songs have been recorded by the likes of George Strait, Blake Shelton and Brad Paisley—latched onto immediately. “Phil just has the right feel for current sounds, and also a deep understanding of everything that’s necessary to make great records,” Reid says. “All the players on the album were hand-picked CMA award winners, and being able to work with them at Legends Studio in Nashville, where Willie and Waylon and so many of my other heroes made records, was really a dream come true.”
Establishing a presence in Nashville is the goal all country artists seek to attain, but being able to do it on one’s own terms is an entirely different matter. Reid felt he had no other choice but to take the slow-but-steady path, and his commitment to that belief is finally coming to fruition with Rust. While his story isn’t unusual, it’s a clear example of how undeniable talent can eventually win out in the end.
“I’ve always written songs, but when I started out playing clubs, you kind of had to play the hits everyone wanted to hear,” Reid says. “That was fun, and I met a lot of great people during that time, but around 2011 I decided to take a break and really concentrate on writing songs that got across who I was, without apology. I discovered right away how much people appreciated that, and I started building a new following. Getting a standing ovation the first time I played Big Valley Jamboree really confirmed it all for me, and since then I can’t see any way to do things other than just be who I am.”
And while much of the material on Rust is rooted in the Alberta soil that five generations of Reid’s family has farmed for over a century, the themes at the heart of the songs are universally relatable. For instance, most people have surely had the same fantasy captured in “Cowboys Were Kings” of somehow escaping fast-paced modern life and “waking up in the wild west,” or, as on the powerful “Ghosts,” been in their favourite bar and had the full weight of its history, and the people who used to drink there, suddenly come to light.
And then there’s “That’s What Grandpa’s Do,” a song that, if it fails to move you on first listen, probably means you don’t have a heart. “Writing that song was cool because it came out of just the three of us—Phil, myself, and Buddy Owens—talking about writing something about how important our grandpas were in our lives,” Reid explains. “So the song has bits of all of our memories in it, and putting them together really proved to me how many common experiences all of us share, even if they’re not exactly the same.”
Rust is the album Blake Reid has been building toward his entire life, and it’s heard in every line and every note. Despite how much country music has evolved, those who understand it best know that one thing never changes: authenticity. Blake Reid is as real as it gets, and soon country fans everywhere will know it.