February 1, 2019 (Toronto, ON) – After a strong finish to 2018 with the release of country anthem “RDNKN” and four BCCMA nominations, Chris Buck Band returns in 2019 with the release of their sophomore album All In, set for release on February 8 via Royalty Records. Releasing the record’s third single, “Good Ol’Days” is available today at Canadian country radio and across streaming platforms.

Featuring his 2018 hits ‘Spin on It’ and ‘RDNKN’, All In shows the multifaceted sides of Chris Buck and invites fans to get to know him on a more person level, both as an artist and a songwriter. From paying homage to his home roots with the upbeat, opening track ‘Holy Ground’ to showing his sentimental side with country ballad ‘Driftin’, this sophomore album is a personal reflection of Buck that goes beyond his RDNKN party anthem.

Breaking onto the scene in 2017 with their debut, self-titled album, Chris Buck Band quickly became one of the fastest rising Canadian country acts with the release of their Billboard Top 20 hit ‘That’s When You Know’  featuring country darling Kira Isabella. The track skyrocketed with over 4 million streams and over 80K Spotify playlist adds in addition to its CCMA Award nomination for ‘Video of the Year’. Since then, Chris Buck Band has performed across the country on some of Canada’s biggest festival stages including Boots & Hearts, Rockin’ River Music Fest, The Calgary Stampede and Manitoulin Countryfest.

Embarking on a cross-Canada radio tour to support the release, fans can expect to see more of Chris Buck Band going all in this summer with more show date and festival plays to be announced. To stay up to date on all upcoming shows and new music, please visit www.chrisbuckband.com. 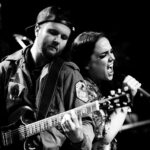