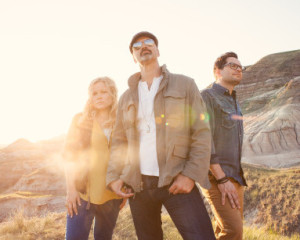 Whenever Hey Romeo get together to write and record, the result is a reflection of their commitment to their craft, to their fans, and, above all, to each other. Their latest EP, Ride With Me (Royalty Records/Sony Music Canada), is no exception.

While Ride With Me finds Hey Romeo offering up their signature blend of harmonies and the fluent musical interplay they’ve cultivated over 13 years of touring and recording, it also finds them stretching out individually and collectively.

Produced by keyboardist, Rob Shapiro, guitarist, Darren Gusnowsky and Johnny Gasparic (MCC Studios), there are echoes of the pop/country vibe they’re known for, but enhanced by a decidedly rock feel Gusnowsky says “is as close to what Hey Romeo sounds like live as possible.”

Ride With Me dwells equally on the hope new relationships inspire and the places where love went wrong. And nowhere is that more evident than on lead single, ‘Pushin’ Up Daisies’ – a rock-fuelled stomp with a bit of aggression in the vein of the Dixie Chicks ‘Goodbye Earl – delivered with a smile and a smirk by lead singer, Stacie Roper.

Far from bringing people down, however, even songs that examine love gone wrong are uplifting. “We’re happy, hopeful people,” Roper says, “but we remember past relationships that weren’t perfect.”

Ride With Me also features Gusnowsky on lead vocals on the title track and ‘Half Your Love,’ a song he says reflects his relationship with wife and “is a tune just for her.”

The band also experimented with instrumentation and feel, copping an eighties rock vibe on ‘Don’t Cry To Me,’ a track that shows their versatility, without straying too far from their country roots.

Frankly, Ride With Me represents some of Hey Romeo’s strongest songwriting to date; a set of songs so true to life fans can slip into them and see their own lives, loves and heartaches reflected there on the very first listen.

About Hey Romeo: Over 13 years, Hey Romeo have played countless shows on their own and with artists including Sugarland, Darius Rucker, Gord Bamford, Johnny Reid, Alan Jackson, Terri Clark and The Nitty Gritty Dirt Band.

In 2008, the band was honoured with a Canadian Country Music Award for Top New Talent of the Year. Their 2010 album solidified their reputation with the Top 20 hits ‘Searchin’ For You’ and title track ‘That’s What I Am.’ Both That’s What I Am and 2012’s Twist Of Fate landed the band CCMA Awards for Group or Duo of the Year in 2011 and 2012, and ‘Hello Patio,’ the lead single from their 2014 EP, I Got This, won the 2014 Alberta Country Music Award (ACMA) for Song of the Year.