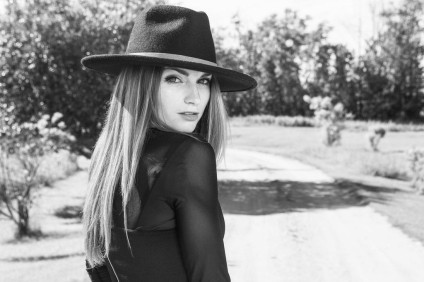 A multi-faceted talent grown in a small town in Manitoba, and cured on an acreage in, Alberta Amy Metcalfe is the newest face to Country Music.

She will argue that not a day goes by that she isn’t inspired to write. Surrounding herself with reasons to be inspired, “ I’m hardly ever not writing something”, says Amy. Many of her ideas have come to mind while working with horses, her second job, “It’s a peaceful job and gives you a lot of time to think and do hard work at the same time… also the horses don’t mind if I record a voice memo on my phone in the middle of a conversation, cause well they don’t generally reply to me anyways haha”

Her debut EP was released in the spring of 2015, with 6 of the 7 tracks written on her own. Amy hopes the compilation gives listeners a good sense of who she is as a person.

“This EP, if you listen to the lyrics, is about self discovery whether that be through someone who hurt you, someone you’ve lost, or the person you’ve shaded yourself to be. As a new artist I’m trying to figure out my place in the mix and this album is a good representation of the last few years of my life. There are a lot of question marks in the lyrics. I’ve been blessed to write with so many amazing writers but I felt like the stuff we wrote was better suited for my second album, allowing room for growth and to show another side of me… as there seems to be a few of those!”

Upon releasing her EP Amy, alongside Royalty Records, decided to release a third single to radio, which was not included on the album. The song “Whiskey Won’t Fix Me”, which was released strictly as a single,  is a duet with labelmate and CCMA Rising Star Nominee Tristan Horncastle. The duo performed the song written by Amy and Byron Hill as a mix of Tristan’s smooth traditional country vocals and Amy’s more modern country feel and quickly became a hit with radio. This single placed them on Billboards top 100 for 11 weeks, peaking in the top 50.

Amy aspires to impact Canadian Country Music in a big way by embracing radio and performances across Canada. Over the past year she has played an international festival in Chengdu China, opened up for Diamond Rio, and embarked on Canada wide radio tours. Her hopes are that with every performance and listen you experience, you leave with a sense of who she is and can relate to the life in her lyrics.