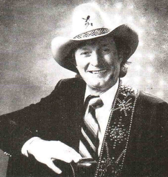 RIP: Jimmy Arthur Ordge, a Canadian country star born in Donalda area where he started picking and playing for school house dances. Jim moved to Edmonton in his teens and was a regular on “Old Dad Taylor’s Jubilee Jamboree”.
Jimmy Arthur Ordge was among the first Canadian country recording artists to score top 10 hits on Canadian charts, with his 1967 hit “Irena Cheyenne” and again in 1970 with his novelty hit “The Ballad Of Muk-Tuk Annie”, a tune written by Canadian hitmaker Bob Ruzicka.

Jimmy Arthur Ordge recorded albums on the Point, MCA and Royalty Records labels, and charted multiple singles. He was a popular performer on the Western Canada music scene, and was often called upon as a show opener for touring Nashville stars like Buck Owens, Webb Pierce, Roy Clark, Hank Snow, etc.

His recording successes led to 1967 and 1968 Moffatt Broadcast Awards for Best Canadian Folk or Country Record Of The Year, as well as JUNO award nominations for Country Male Vocalist in 1976, 1978 & 1979. In 1971 he received an Alberta Achievement Award as a performer.

Prior to his passing, Jimmy Arthur Ordge had retired but was often called upon as a special guest performer on “Legends” shows in his native Alberta.

“Our Royalty family, and in fact all of the Canadian country music family, lost one of its true pioneers and arguably one of the best traditional country music performers to ever pick up a guitar and walk onto a stage.  Jimmy Arthur Ordge could handle a country song, be it a ballad, uptempo, narration, or country comedy songs.  Jim did them all, from Irena Cheyenne to Muk-Tuk Annie to The Old Man to Herschel’s Hemi Half-Ton, Just One Night of Love, to The Ballad of Pierre Oral Bonafee, the true hilarious story of how the St. Lawrence Seaway was really created.  And any great country classic he chose to sing, he owned.”

“Jim was not just a real Canadian country music legend, he was a true friend.  He cared deeply for his audiences, fans, and mostly his close friends.  He was a compassionate, warm-hearted, country music icon.  We laughed till we cried, telling tall tales during the many recording sessions we shared, fought a little over some songs he might record and release, but mostly I feel just damned blessed and lucky to have witnessed first-hand his magic as a recording artist.  Jimmy Ordge had, and will always have fans across this country, across the U.S. and in the U.K.  His music will live on. Damn it Jim, we will sure as hell miss you.” – R Harlan Smith

Jimmy was born and raised in the Donalda area where he started picking and playing for school house dances. Jim moved to Edmonton in his teens and was a regular on “Old Dad Taylor’s Jubilee Jamboree.”

Jimmy did shows and dance jobs around the area and in the early 50’s, he started doing radio and television shows. While playing a club in Whitehorse, he met Al Oster who wrote Jimmy’s first hit, “Irena Cheyene.” “Irena” won him his first Moffat Award. Jim’s other big hits included “Muk Tuk Annie” and “Hershel’s Hemi Half-ton.” When country music hit a decline for a few years, Jimmy diversified and bought himself a business that kept him busy when not entertaining.

Jimmy continued to entertain folks with “That Voice” in the traditional country style that hadn’t changed in the last four decades and was often a guest artist with the Canadian Country Music Legends touring throughout Alberta.

Four albums including “Storytime & Prayers”, “I’ll Go Anywhere”, “Greatest Hits”, and “The Legend”, and numerous top 20 Canadian country hit singles including “The Old Man”, “Just One Night of Love”, “The Ballad of Dawson City”, and “Herschel’s Hemi Half-Ton”, to name a few