Most recently honoured with the 2012 CCMA Slaight Music Humanitarian Award, Tenille presents The Play It Forward School Tour beginning October 15th, 2012. This exciting launch of the Play It Forward tour will take place in Tenille’s home province of Alberta between October 15th and November 9th, 2012.

The Play It Forward School tour is a 50 minute in-school presentation that uses music and storytelling to spark interest, ignite change, and fuel passion while recognizing positive leadership efforts of our nation’s youth! Particular emphasis given to selfless, community-minded behavior that helps others; essentially, PLAYING IT FORWARD!

During the presentation, Tenille and staff members of the school will call on 1 – 3 pre-determined leaders out of the student body who will be recognized for their actions. Each leader will receive honorariums to Play It Forward…. Additionally each leader will also be entered to win the final mass draw at the end of the tour! The final draw at the end, will include a $10,000 prize pack consisting of a $5,000 donation to a charity of choice that the chosen leader is passionate about, and a $5,000 monetary prize to the school of the winning leader to be put towards a program that Plays It Forward.

Tour dates will be announced on Friday September 28th, 2012.

Awarded the 2012 Alberta Country Music Association Award for Female Artist of the Year, Grande Prairie’s Tenille first experienced national media attention at age nine, when she was hoisted on to an Edmonton stage to perform with Shania Twain. It was then she declared, “I really want to be a singer – that’s my dream.” And and so her dream unfolds…

Tenille was signed to Royalty Records at seventeen years old and was selected to sing when the 2010 Olympic Torch Relay went through her hometown. Later that year, she took the stage at the CCMA New Artist Showcase and her song “Time Machine” placed in the Top 50 for the International Songwriter’s Competition in the youth category. Tenille’s exceptional songwriting skills have aligned her with Nashville SESAC Legacy Award Winner Stan Webb, and multi JUNO nominated and CCMA Award winners Tim Taylor, Byron Hill and Troy Kokol.

One year later working with Nashville-based Canadian producer Fred Mollin, Tenille released her debut album, REAL, in 2011. The album reached #13 on the Soundscan Country chart in its first week and earned Tenille the title of youngest ever nominee for Female Artist of the Year at the Canadian Country Music Awards.

On July 9, 2012 Tenille’s latest single, “Starts With You” was serviced to Canadian country radio.

A strong advocate for ‘giving back,’ Tenille has contributed to fundraising efforts for Slave Lake, Haiti and is the creator behind the annual music event Big Hearts for Big Kids benefiting Sunrise House, the only youth emergency shelter north of Edmonton. In the three-year event tenure, $194,000 was raised which helped to keep the shelter doors open. Her efforts have been recognized by Chris Warkentin, Canada’s Member of Parliament for Peace River and she was also recognized by the Grande Prairie Volunteer Services Bureau Association and awarded a Leaders of Tomorrow Award.

On September 8th, 2012 at the Canadian Country Music Association Awards in Saskatoon, SK, Tenille was honoured with the 2012 Slaight Music Humanitarian Award, previously won in 2011 by Johnny Reid and Gord Bamford in 2010.

Tenille’s Play It Forward tour begins October 2012 in her home province of Alberta and will continue to move throughout the country in the spring 2013. Additional school tour dates and locations will be announced shortly.

Go to www.tenille.ca/playitforward for the latest news, event information and join the conversation by tweeting hashtag #PlayItForwardSchoolTour.

A special thank you goes out to our sponsors, Low Impact, Caron Measurement and Controls, Canadian Tire (Grande Prairie Store), Save On Foods and T-Ram Canada. 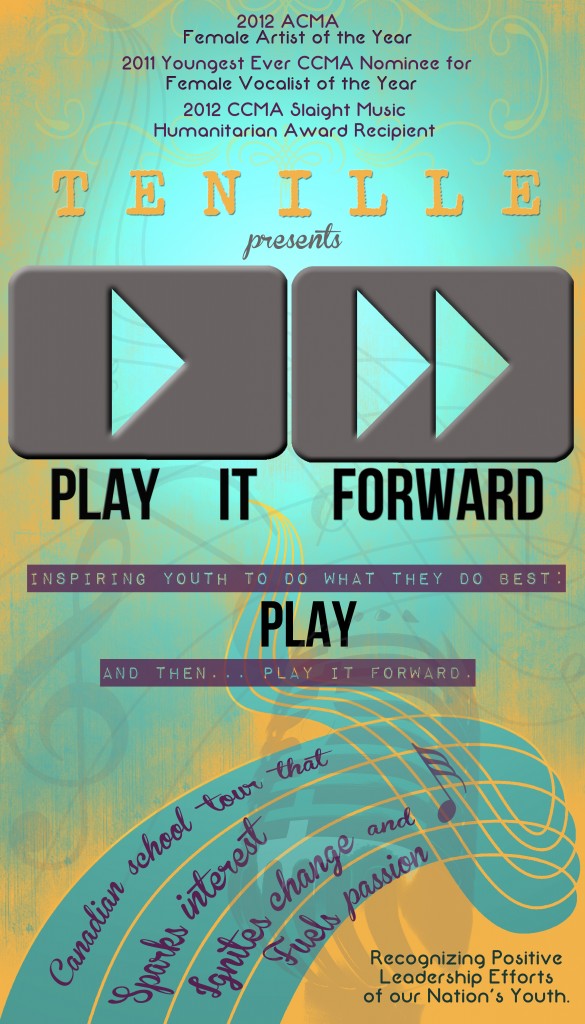 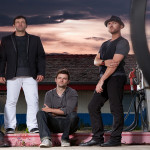 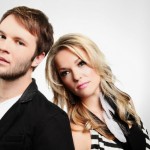 THE ORCHARD KICK OFF 2012 WITH THEIR 1ST SINGLE RELEASE