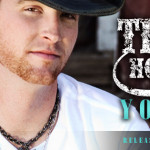 YOU WANT – THE NEW SINGLE FROM TRISTAN HORNCASTLE